From container houses to clay 'earthships' and houses made from recycled windows, the world of recycled architecture is blossoming. We look at six well loved recycled building projects!

Imagine making a house from toothbrushes, old CDs and floppy disks. Imagine filling the inner walls with denim and covering the outer walls in carpet tiles. It does all seem a bit, beyond the imagination. But for Duncan Baker-Brown and his team of undergraduate structures students, it was a reality. The build, which took 11 months, resulted in an Eco-house quite different to its contemporaries. Many would be quick to assume an eco-house should be built within nature or by using nature, not by using rubbish. The sustainable method of using recycled materials means that buildings can be put together for considerably less (than brick). That’s not evident from this particular build which is estimated to have cost in the region of £300,000, but it is a model for the future. This was in fact the second version of this house, with the original being designed by Baker-Brown and the well-renowned Kevin McCloud. We wrote a full article on Brighton's Waste House which you can read here.

Using 1,000 recycled doors, South Korean 'salvaged materials artist' Choi Jeong-Hwa transformed a bleak, ordinary building in Seoul into an eye-capturing creation. By using the colourful doors, Choi has created a building that blends doors from the past with sustainable construction methods of the future. This installation by the artist is not one of his more famous pieces, the artist is best known for the 'Happy Happy Plastic Stadium', in which we used over 1.7 million pieces of discarded plastic to cover one of Seoul's major stadiums. You can find out more about Choi Jeong-Hwa in an interview with the artist himself at the end of this article.

In Mexico City, a British man called Richart Sowa built an artificial island using plastic bottles and plastic bags. Using layers of the bottles and bags the island is able to float. A layer of soil and vegetation mixed with the plastic allows it to bind together more effectively. After Hurricane Emily in 2005, Sowa's island was completely destroyed and he had to start again from scratch. Version two of the island was built and named Joyxee island.

In a project lasting around 20 years, Donald Espinosa built a four story structure almost entirely from recycled materials. The Vietnam veteran claims that the 'Rococo Church' was inspired with his nagging mother, Jesus and marijuana; one suspects he is not entirely of sound mind. The castle, in Antonito, Colorado, is made from aluminium cans, hubcaps, rocks, scrap metal, glass, wooden boards and lots of fixings. Espinosa is continually improving his recycled house, despite continual claims that the end of the world is nigh. Either way, it's a cool project and the recycling world love it!

This Thai recycled building is better known as the 'million bottle temple',

though it is believed that the total amount of glass bottles in the construction exceeds 1.5 million.

In 1984, monks from the Sisaket area near Cambodia encouraged local residents to bring their glass bottles to aid the temple's construction. Using a mixture of Heineken and Brown Chang, the monks originally build a temple, then decided to keep going and built other structures from recycled glass. A crematorium, sleeping quarters, toilets and water towers were all added on.

If making the walls from glass bottles wasn't enough, the monks proceeded to use the bottle caps to create beautiful mosaics. Construction, and mosaics are still ongoing. 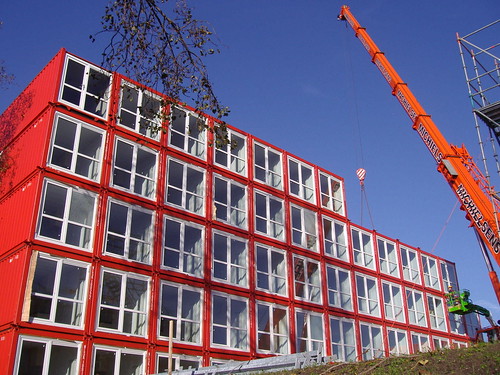 Keetwonen, in Amsterdam, Netherlands, is the largest container city in the world. Originally, the idea for converting shipping containers into affordable housing solutions was aimed at the temporary housing market, or potentially for the homeless. In Keetwonen, it actually turned out that students fell in love with the idea and the container city is the second largest residents for students in Amsterdam.

Original fears for the container apartments included 'too small, too cold and too noisy', but the claims turned out to be false, with students stating that the conversions are spatially friendly, quiet and sufficiently insulated.

They're also a cheap rental option.

Container cities have popped up in Nigeria, Denmark and Haiti, among other places.

Which is your favourite of these recycled houses?